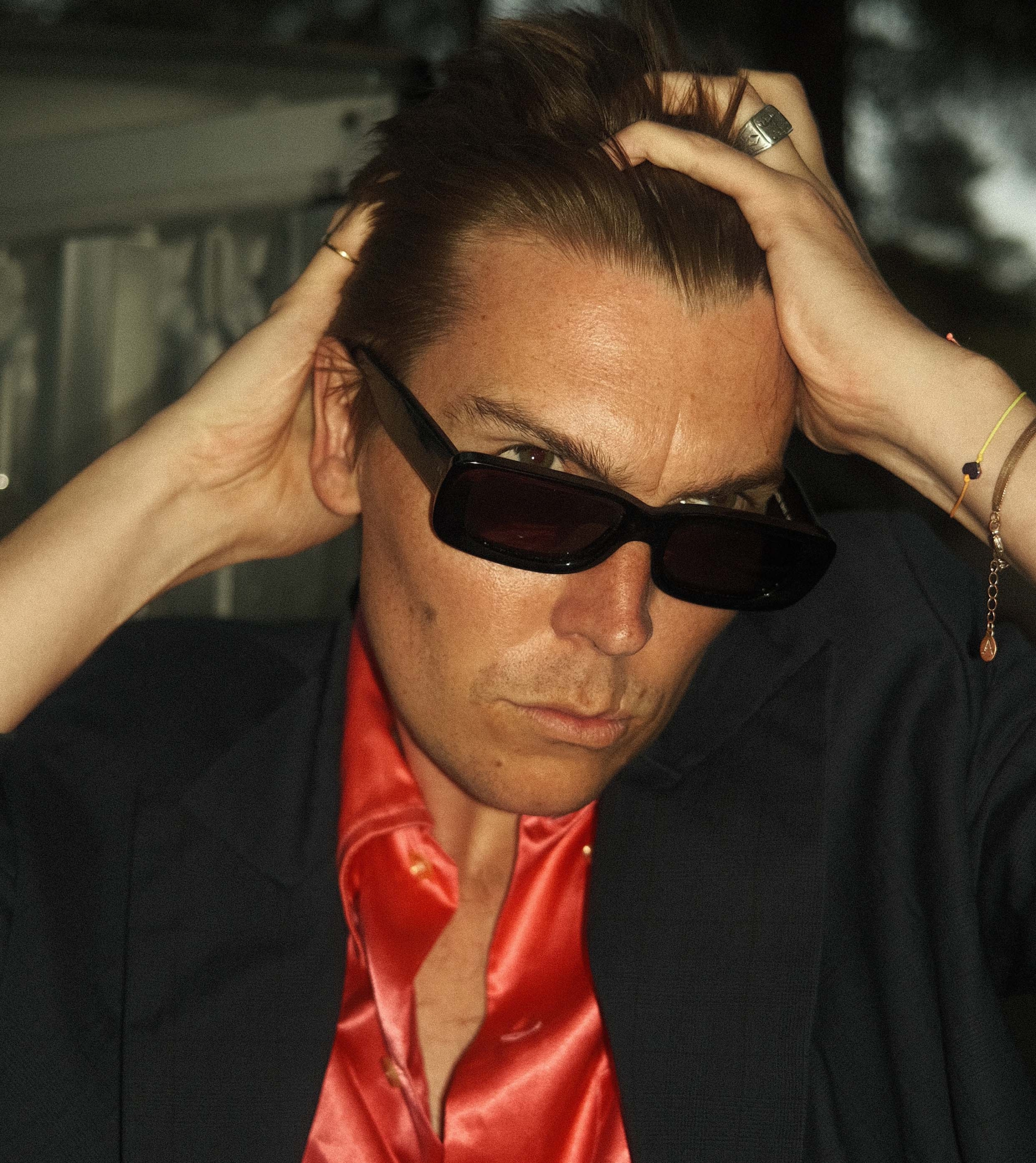 When Alex Cameron debuted with Jumping the Shark, the characters he embodied radiated a woozy combination of virility and Viagra, airing out dance moves that seemed to say “come to daddy” and thus “get far away while you have the chance.” The 20-something musician sang, with perfect poetic seediness, from the perspective of hypermasculine middle-aged men having a rough time of life and acting out in an unsettling parade of self-inflation. “I’m still the king of this town,” croaked his just-laid-off businessman character on “Happy Ending,” over melancholy synths that didn’t quite corroborate his claim. On Forced Witness, his first new full-length on Secretly Canadian, following the Jumping the Shark re-release, the men of his songs peacocked all the more desperately as they sang of “chasing pussy on the internet” in Springsteen-ian anthems, beneath whose grandeur was a deep, insurmountable loneliness. His newest and most musically expansive LP, the glistening Miami Memory, takes a surprising turn. Cameron’s flair for narrative and character are still on full display; yet Miami Memory’s most frequent narrator is, for the first time, Cameron himself—singing with stunning candor of his three-year relationship. No longer playing the roles of, say, an obsolete TV personality or a late- career-Brando-revering homophobe or any number of men groping for affection in the abysses of their own making, this new narrator we can safely call Alex Cameron is deep in (requited) love.

“When you listen to these songs, and you’re waiting for the twist, or the joke, or any kind of discomfort, I can assure you none of those things were there when I wrote them,” says Cameron. “These are true stories, of actual events. Specific but never esoteric. And graphic but never offensive. Miami Memory is the story of a couple balancing sex with contemporary family values…It’s my gift to my girlfriend, a symbol to hoist on the totem of love.”

The first single, “Miami Memory,” encapsulates the album’s tender and rare, unapologetically sexual vision of long-term commitment. A droning drum kit carries a sense of dread through the song as Cameron and Jemima Kirke make memories in a paradise whose future is condemned by rising sea levels; layers of shimmering nostalgic synth build and cocoon Cameron’s professions of love—and sweet recollections of cellulite massages and “eating ass” against all external disaster. In the title track’s accompanying music video directed by Cameron, he sheds the campy masculine parody he’s cultivated, in a climactic reveal. Head shaved, he dawns a crystal headdress and the makeup of a hung-over Marie Antoinette, surreally nodding to his desire, on Miami Memory, to “stop telling stories about decrepit men, and instead offer [his] experiences of a strong woman” and to offer a broader celebration of women’s perspectives and empowerment. Rather than abandoning his penchant for melodrama he uses it as a curiously well-matched adornment for sincerity—and this artistic choice to heighten the real with a taste for the extra runs through the entire album.

Though remnants of his synth-driven earlier work sneak in to unsettle the tone, the bulk of Miami Memory, produced by Jonathan Rado (Weyes Blood, Father John Misty) and recorded and mixed by Marta Salogni (Björk, Kelela), revels in the emotional overdrive of classic dad rock, its warm, anthemic songs driven by bass, guitar, sax, and layers of Vegas wedding chapel-ish organ. On “Far From Born Again,” the album’s third single and Cameron’s “sex worker anthem,” the musician mines the hypocrisy of the oft-gendered social stigma

surrounding sex work, singing about a woman who earns more than most men—“in control and command…just a woman in charge of her plan.” The song lays out the album’s worldview, rising towards an exalting onamatopoeic chorus between Cameron and the enthused sax of his business partner Roy Molloy. Back in the realm of his relationship, on “PC with Me,” Cameron croons an homage to he and his lover’s affinity with each other’s dark senses of humor; “Other Ladies” cinematically portrays the realization of wanting nothing but to devote oneself entirely to another.

Cameron’s tribute to his relationship encompasses not just ecstasy, but also an open expression of the nuances of human behavior that can endanger all romantic relationships. On “Divorce,” the album’s second single, Cameron draws on the empty threats of disappearance lovers explosively make to one another; consistently resisting the obvious, he juxtaposes his explorations of intimate tensions here by setting them against his most gleefully up-tempo track; the chorus of “divorce, divorce” almost sounds like an exclamation despite the misery it portends. In opener “Stepdad,” Cameron, who’s become a major presence in his girlfriend’s children’s lives, projects into his own future in an ode to the oft-mocked peripheral parental role. An instrumentally minimal track, driven by manic, tinny synths, Cameron’s voice here kicks off the album with unprecedented vulnerability as he delivers what might be a final message to his future stepkids. Similarly, the edenic bliss of closer “Too Far” is besmirched by lyrics about a “bobbing turd” of an ex returning to his lover’s life. But as Cameron grapples with his own insecurities, an ethereal soprano whisks away the brief annoyance, and Cameron delivers a spoken word message of unwavering devotion—regardless of any encroachments from past lives.

Though it’s less prevalent, Cameron also continues to interrogate the power trips and isolation of masculinity. In “Bad for the Boys”—a spiritual sequel to Thin Lizzy’s “The Boys Are Back in Town”—he considers male figures who’ve abused women and tried to beg for mercy amidst an altered social terrain, then attempt their comebacks—to everyone else’s horror. He explains, “This song is like, ‘what would happen if the boys were actually back in town?’ It’d be a miserable fucking party—it’d be a burden. You fucked up too hard. Does the town want the boys to be back?” “Gaslight,” meanwhile, quite fittingly feels like a deceptively gentle embrace, as it lays out the insidious titular tactic over folksy accordion and gentle acoustic guitar.

Cameron’s dad rock funhouse of an album ultimately twists and subverts the genre: it recalls classics the white male ego has historically visited for its regular adrenaline injection, and morphs them into a singular “stepdad” rock that largely turns its lens away from the dads, celebrating the demise of old norms of gender and power. In his depiction of his relationship, Cameron reveals a striking honesty about love and sex in a time where a palpable fleetingness hangs over everything from relationships to human life on this planet—but also where constricting mores have deteriorated enough to let “family life,” in all its morphing forms, exist outside of social obligation. With arresting straightforwardness, Cameron now sings as himself, paying tribute to sex, family and responsibility, and, to his love.