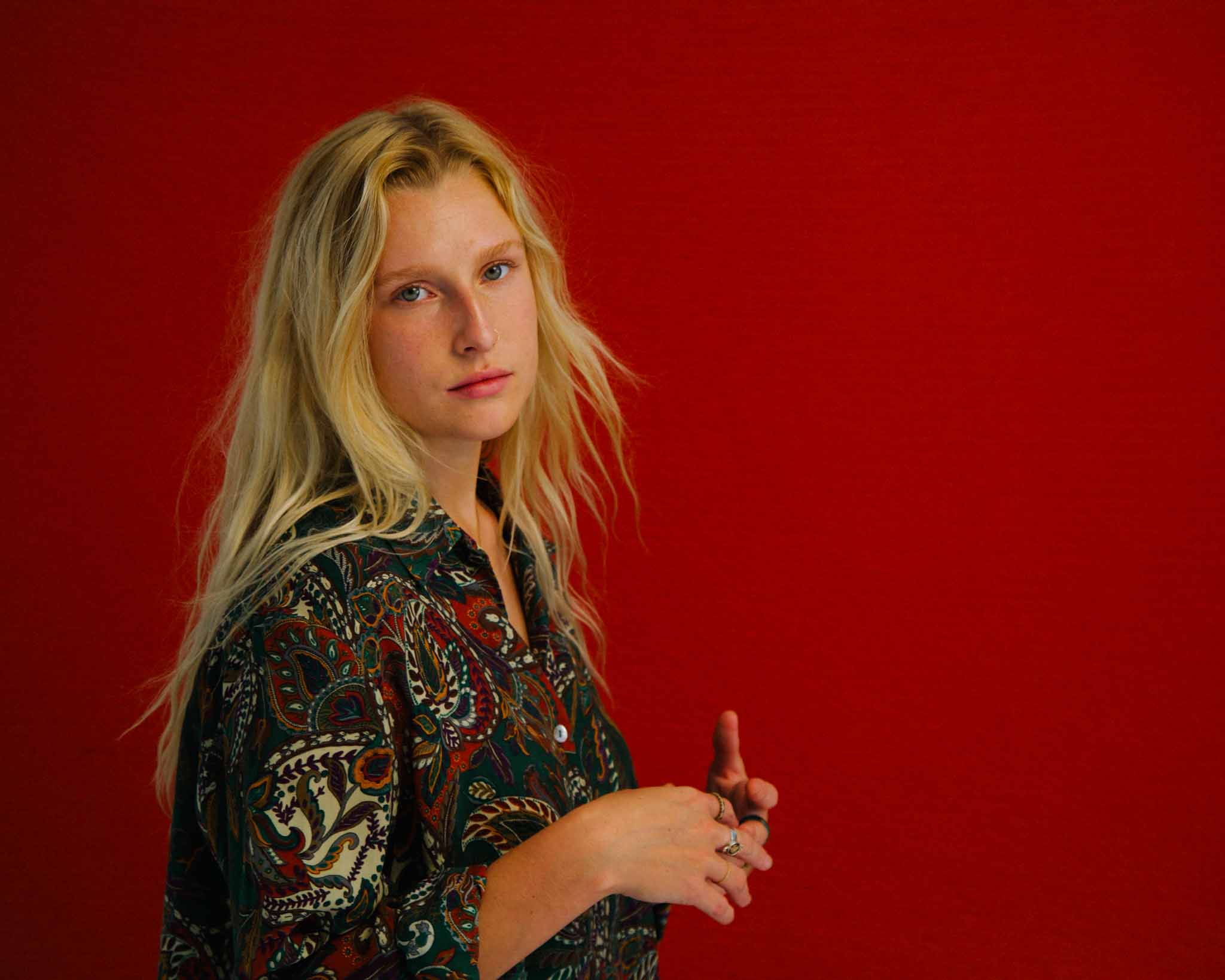 Billie –born Isabella Sophie Tweddle – got her early start in music thanks to parents who surrounded her with the music of Nick Drake, John Martyn, Joni Mitchell, Joan Armatrading, Kate Bush, Loudon Wainwright III and northern folk artist Chris Wood (who once told a nine-year-old Billie to “go for it!”). The family lived in the pastoral rolling hills of Ripon, North Yorkshire, where Billie grew up in and around the Dales. “I feel a lot of emotion [in nature],” she says. “Like this extreme form of empathy. I find it a very comforting blanket. It cradles you, it’s always there. It’s not going away.”

Built on the minimalist acoustic folk she made a name for herself with, Billie Marten’s breath-taking new record Flora Fauna is a mature, embodied collection of songs fostered around a backbone of bass and rhythm. “When I was younger, I was quite trepidatious in my songwriting,” she reflects, while sitting in the winter sunshine in her adopted home of East London. “I concealed myself in my music. Now, I’ve gained more personal strength than I had before, I was so obsessed with what people thought of me then. Over time, you learn to care a bit less – and you start writing about the things that really matter.”

Billie was then signed to Chess Club Records, an imprint of Sony, “the day before my Maths GCSE”. I was revising and then signing in this big glass boardroom.” Not long afterwards, she was nominated for the BBC Sound of 2016, making fans out of Radio 1 tastemakers like Annie Mac and Huw Stephens. Her critically acclaimed debut album, Writing of Blues and Yellows, was a diarist, open-hearted collection of quietly beautiful songs released in 2016, when she was still just 17. The following year, she moved to London, where she worked on her 2019 follow-up, Feeding Seahorses By Hand, which The Line of Best Fit declared a “gentle and reserved masterpiece”.

Towards the end of 2019, Billie underwent a total overhaul, leaving Sony and choosing a new management team. She then went back into the studio and reunited with producer Rich Cooper – whom she worked with on Blues and Yellows – Billie felt empowered to experiment and rediscover herself. “I picked up the bass instead of the guitar – which made all my rhythms different, because I can’t play bass,” she laughs. “That made everything a lot punchier and more direct.” With Rich adding drums to the songs as they were being written, the sound they developed together was one with a rapid pulse and rich instrumentation. The list of inspirations Billie brought to the studio roamed from krautrockers Can – “their rhythms are just bizarre, and don’t make any sense” – to Broadcast, Arthur Russell, and Fiona Apple. “It was such freedom to play, and just be, and explore different corners of me that I hadn’t before.”

The result was Flora Fauna, a confident and full-chested album that sheds the timidity of Billie’s previous work in favour of a more urgent sound. The songs tell a story of personal growth, and what it takes to flourish. “I wasn’t really treating myself very well – I wasn’t very kind to my body,” Billie reflects. “It was a bit of a disruptive time. All of these songs are about getting myself out of that hole; they’re quite strong affirmations.” As well as independence in her musical career, they mark a period of personal independence for Billie, as she learned how to nurture herself and break free from toxic relationships – and a big part of that was going back to nature. “The name Flora Fauna is like a green bath for my eyes,” she says. “If the album was a painting, it would look like flora and fauna to me, it encompasses every organism, every corner of Earth, a feeling of total abundance.”

Lead single “Garden of Eden” introduces Billie’s strident new sound with a strong bass riff and her hushed, resonant vocal front and centre. “Writing this song felt specifically like a new turn,” she says. “We made sure it had such pace and gravitas. I always feel like it’s a running song.” A stark portrait of burnout, the lyrics were inspired by Billie seeing others working so hard constantly, exhausting themselves chasing an elusive picture of success. “I had this idea of us humans all growing up in a greenhouse, like tomatoes – we need to be watered and fed, and we need the sunshine, and there’s often not enough room or time for that. The chorus is about how growth is a necessity, it just doesn’t necessarily have to be on someone else’s timeline. It’s a healing, joyous song.”

Elsewhere, the prowling alt-rock song “Human Replacement” sees Billie make sinister use of her vocal register to evoke the feeling of being followed down a dark street. Whispering almost ASMR-like to echo that close and isolated sentiment. “It’s an incredibly heavy song,” says Billie, “To put it simply it’s about not being able to go outside at night, as a woman.” The track explores her feelings of intense vulnerability in the capital, as well as her privilege as a white, northern outsider moving into the city. “When you come to a city like London, it just fills you with an incredible sense of perspective.”

Another meditation on city life comes in the form of “Pigeon“, with an unshakeable hook (“I am sick of branding and one-legged pigeons”) that came to her while she was riding the tube. The song is a “stream of consciousness”, she says, about the fact that there’s scarcely a surface in central London that isn’t plastered with advertising. “Sometimes I just don’t want to buy anything! I don’t want commerce. Sometimes I just want to be free-spirited, walking around the capital city, to remain unaffected and uninfluenced by modern culture.”

The record ends on a reflective meditation, as the song “Heaven” begins with a field recording of an evensong in Verona. Growing up with one Christian and one Atheist parent, Billie found herself often confused about her own faith, which she lightly begins to unpick on this lustrous, contemplative song. “I think about it a lot – aspects of your conscience, that voice in your head, and what that is,” she explains. “It’s interesting, how people live their lives, and if they expect to be saved. Without religion, a lot of that is very insular and comes only from you. There is no congregation, it’s just a singular thing. ‘Heaven‘ questions aspects of that.” The album then ends with Billie plucking her acoustic guitar, sounding not a million miles away from her previous self. She’s still the same inquisitive and introspective voice, as starkly captivating as ever, but this time older, wiser, with a band and a journey of self-discovery behind her.