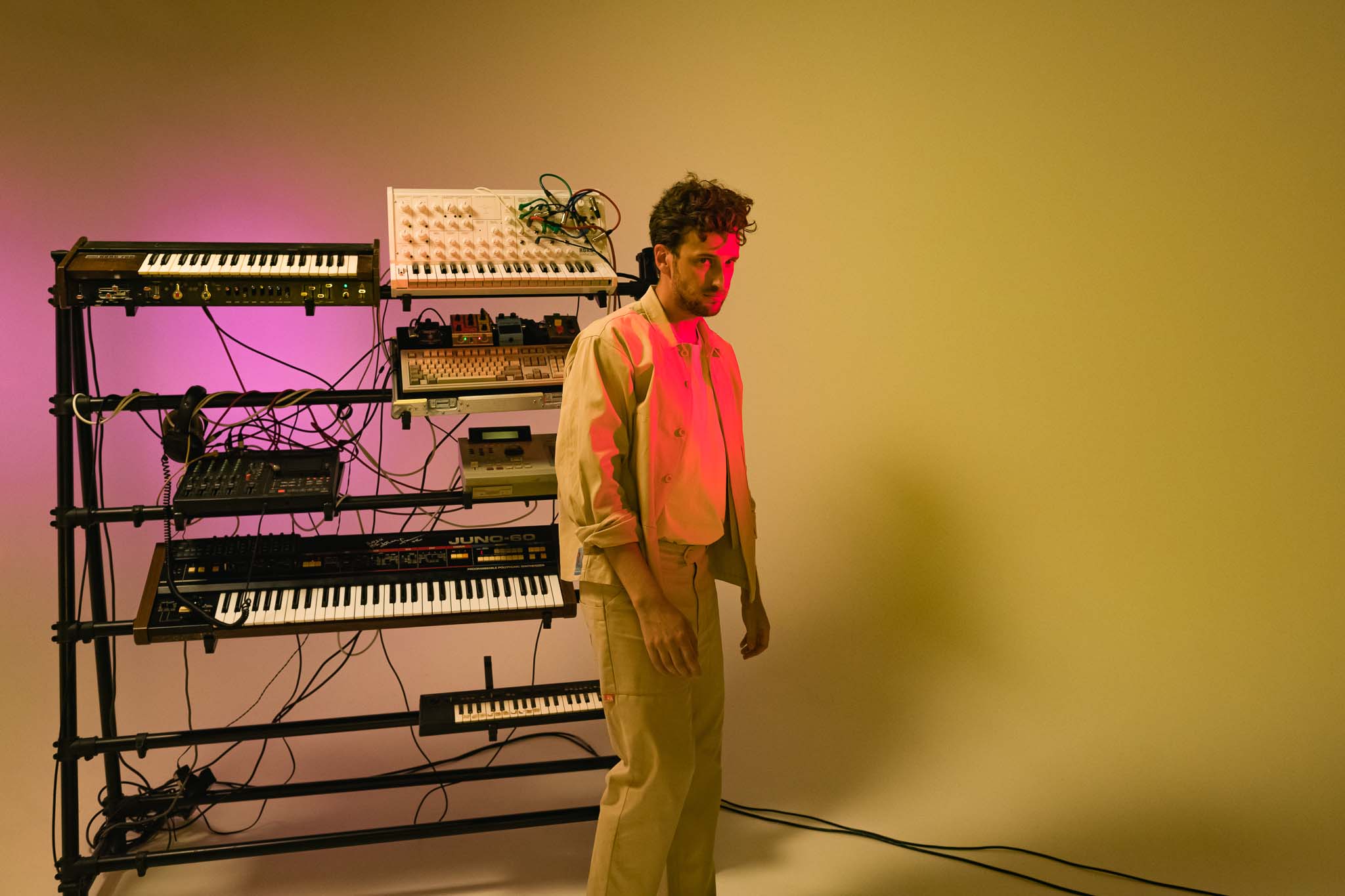 Take the vinyl of Boy, the debut album by Harvey Sutherland, flip it over, and on the back sleeve, you’ll find a diagram – an elaborate collection of graphs, vectors and philosophical theory that dissects the very nature of what it means to be funky. “It’s not that the player plays funk; it’s that the player is played by funk,” reads one cryptic line. “Even the most unfunky moment can be funky,” goes another. Trace the line of obsession through the unfunky valley and eventually, you end up at a place: ‘neurotic funk’.

“I wanted it to come across kind of pseudo-academic – you know, psychobabble,” grins Mike Katz. A producer and bandleader from Melbourne, Australia, Katz has been releasing music under the name Harvey Sutherland since 2013. The concept of neurotic funk came out of a chat he had with his friend Sam, a Lacanian scholar and meme lord. Yes, it’s meant tongue-in-cheek. But there’s the germ of something serious in there too, something Katz addresses further in Boy’s naggingly groovy lead single “Jouissance”. “I learned the word from my therapist – there’s no easy English translation, but it’s the itch that demands scratching, a masochistic desire.” The term seemed to speak to Katz’s musical process – a congenital perfectionist and overthinker doing his utmost to get louche and loose. For me it represents an obsessional energy, a frustration in finding the funk,” he laughs. “It’s about acknowledging my shortcomings along the way.”

Shortcomings? Don’t worry, that’s just the neurosis talking. Drop the needle on Boy and find yourself transported to a hypermodern take on funk music. Recorded between London, Los Angeles and Katz’s own Swimming Pool studios with a host of hotshot Melbourne session musicians and a string of guests, tracks like “Age Of Acceleration” and “Michael Was Right About You” take the base elements of funk and fire them through a prism of influences – the hyper-produced studio pop of Todd Rundgren, the lush synth groove of New York boogie and the harsh snap of coldwave. Early Harvey Sutherland 12-inches like “Bermuda” and “Priestess” (handpicked by Paul Woolford aka Special Request for his recent DJ Kicks compilation) were electronic dance records in love with the sound of soul, funk and disco music. But Boy is every bit the real deal.

Boy has been a couple of years in the works, taking shape in between tours with Khruangbin and Hot Chip as well as a busy studio schedule that include production and killer remixes for Disclosure and Genesis Owusu. In this time, Katz also spread his wings as a bandleader, touring internationally with his live ensemble and directing an 11-piece band for the New York boogie icon Leroy Burgess on his Australian tour. “I love DJing and making music for those spaces,” says Katz. “But I’d come from a band world, so early on I found myself dragging keyboards and drum kits onto tiny nightclub stages.” It was, he says, “a trial by fire… now I treat playing live with as much attention to the mood of the room as I do when I DJ. Messing with arrangements at the last minute, maintaining a flow – everyone in the band has to be tuned in.”

Boy is powered by this sense of live musicality, but it’s also something deeply personal. Katz explains he made most of the record “in a circular loop between my studio and my psychotherapist”, so inevitably it started out being a record about his father (hence the “boy” of the title, a term of endearment used by the Katz family). Increasingly, though, Katz realised he was really writing about his own traits and habits. Instead, Boy became a sort of quest for identity; that’s when he knew he had to put his own face on the cover. “I like the idea of oversharing,” he explains. “Electronic music has that archetype of the brooding, faceless producer. I sort of like hacking that, doing the opposite.”

For all its introspection, Boy looks outwards too, “Age Of Acceleration” and “Feeling Of Love” attempts to capture something of the confusion and unrest of modern times. The latter is a collaboration with boogie legend DâM-FunK. Katz wrote the beat in Melbourne, took it out to Culver City, and the pair worked on it in an afternoon writing session. It could pass as a love song, but really it’s about keeping your head straight in an era of misinformation. “Is it about a girl, or is it about society?” asked DâM-FunK. “It’s definitely about society”, Katz replied. There’s another stand-out collaboration in the shape of “Type A”. A taut coldwave number with a deadpan vocal from Jack “sos” Summers of Melbourne punks CLAMM, it’s both a satire on that very Australian custom, “tall poppy syndrome”, and an anthem to the sorts of enthusiastic overachievers who are never, ever satisfied.

But if you’re looking for a key moment on Boy, look to “Holding Pattern”. Katz often sings on his records, honeyed backing vocals and crooned refrains. But after sending the track out to a collaborator and having it fall through, he decided to bite the bullet and step up to sing his first lead vocal. A gorgeously smouldering soul turn with a zesty sax solo, it’s a dare that came off. “That whole process was really confronting,” remembers Katz. “It was like, I don’t know whether I’m a good singer or not – I’m just gonna just kind of put this out there. You know, the world’s ending, why not?” Overthinking it, embracing awkwardness, putting yourself out there: that there is the essence of neurotic funk.