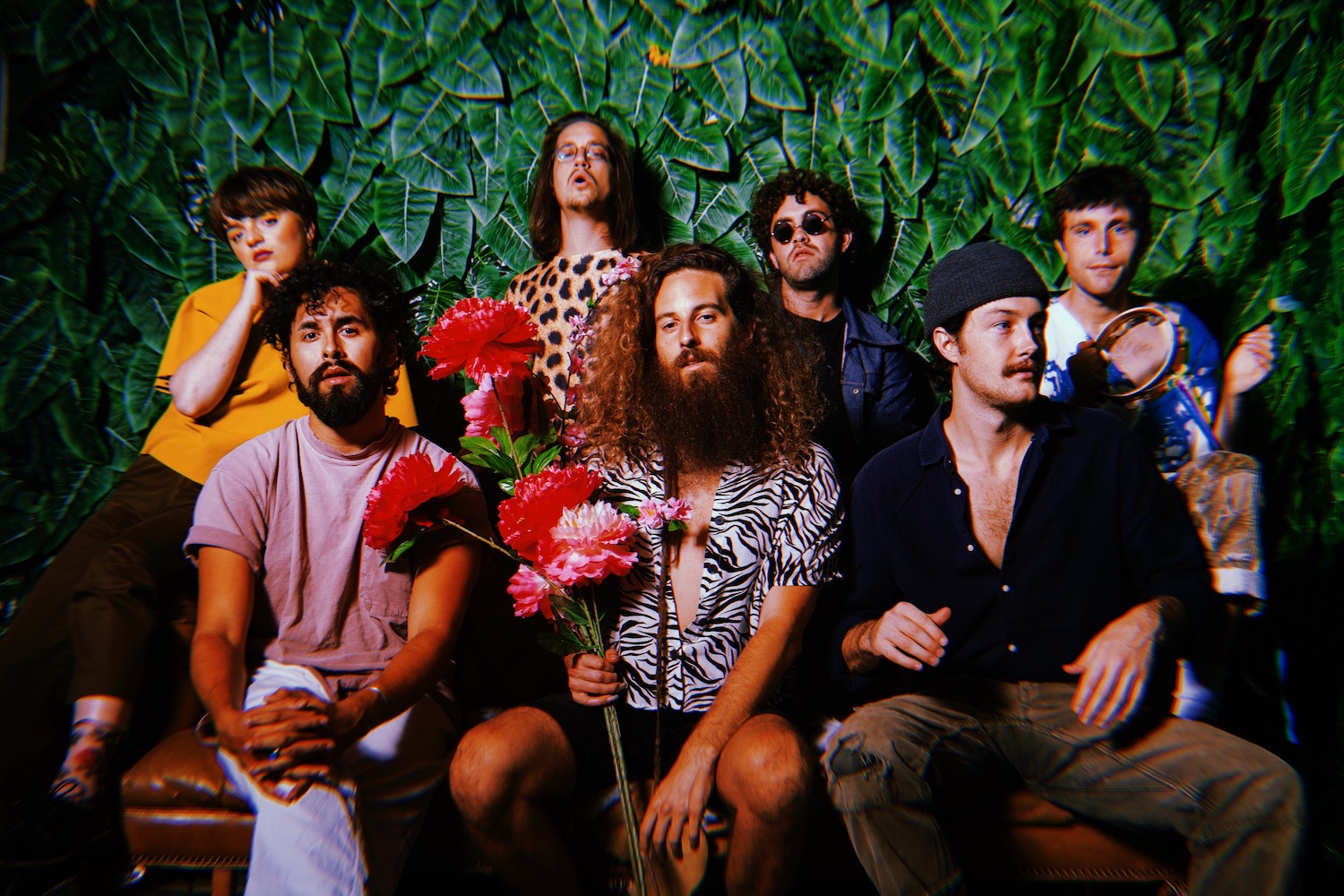 To understand HELLO FOREVER, one must make a pilgrimage to the very top of Topanga, CA, an isolated piece of land once used by the infamous Sandstone Retreat and free-love nudist commune, frequented by the likes of Sammy Davis Jr. There, in a pastoral setting high above the Pacific Ocean – not far from where Neil Young recorded After the Gold Rush or Captain Beefheart laid down the tracks for Trout Mask Replica – singer/songwriter Samuel Joseph has gathered what he calls an art-pop collective that harks back to the ‘60s with a DIY approach to music and creativity which spawned their remarkable debut album, the aptly titled Whatever It Is. Joseph and company have created a contemporary throwback to a vibrant era with a set of songs that establish the collective’s exquisite harmonies and colorful instrumentation.

Combining pop, rock, R&B, soul, doo-wop, skiffle, jazz, gospel, and psychedelic tropes, Whatever It Is captures the freshness of ‘60s icons like the Beach Boys, the Beatles, and Frank Zappa into a series of Kodachrome snapshots on songs like “Colors in the Sky,” “Anywhere Is Everywhere,” “Some Faith,” and “I Want to Marry You.” HELLO FOREVER’s colorful, homemade “Magical Mystery Tour”-like videos show the collective cavorting in and around their mountaintop sanctuary (immortalized in the idyllic “Farm on the Mountaintop,” where “every day could be paradise”).

Joseph’s gnarled guitar riffs mark the Beatles/Beach Boys and polyrhythmic percussion on “Some Faith,” which also permeates “Anywhere Is Everything.” “Colors in the Sky” explores what we endure as we navigate life through its obstacles and terrain of emotions, whereas “I Want to Marry You” is an unabashed love song, set to the church-like hymns of Brian Wilson’s “God Only Knows” or “Don’t Worry Baby.”

On the writing process behind Whatever It Is, Joseph shares, “it was a journey in learning to let go, learning to get out of the way, learning to listen to music and let it be what it wants to be. The album is a time capsule of our process and teleports you into our world, or whatever world you’re meant to visit through it. We hope listeners love it and find joy or peace or truth or some kind of meaningful experience through hearing the album.”

HELLO FOREVER’s music is inextricable with the lifestyle and spiritual goals of its participants, a revolving membership that also includes, at various times, collaborators drummer/co-founder Andy Jimenez, Molly Pease, Jaron Crespi, Joey Briggs, and Anand Darsie.Walk into their communal compound and one of the first things one sees is a copy of the late Baba Ram Dass’ counter-culture classic, Be Here Now, perhaps the best description of the collective’s philosophy of life, creativity, art and music.

The collective has helped spread the word through playing live around Los Angeles as well as putting on free shows in their Topanga home base. Watching a HELLO FOREVER performance is to participate in an all-inclusive ecstatic, quasi-religious celebration unlike your average pop concert. How HELLO FOREVER lives is an integral part of how they make music and helps them stick to a disciplined schedule of five-days-a-week rehearsals.

Innate songwriter and California native Joseph, raised in the South Bay area, was destined to pursue this musical path. His mother was an early Beatles fanatic whose father managed to sneak her in through a stage door to see the Fab Four’s U.S. debut on The Ed Sullivan Show, while Joseph himself once moved just a block away from Brian Wilson’s childhood Hawthorne home.

“Music is just so special in the way it spins out of nothing. It’s abstract, but at the same time, has meaning. It’s about everything we like. It’s about listening to and playing all these different styles, and this is just what comes out,” Joseph concludes. “We don’t judge what comes out. We’ve just learned, through meditation, how to let go, and being with what is. Letting what the universe wants to come through us.”