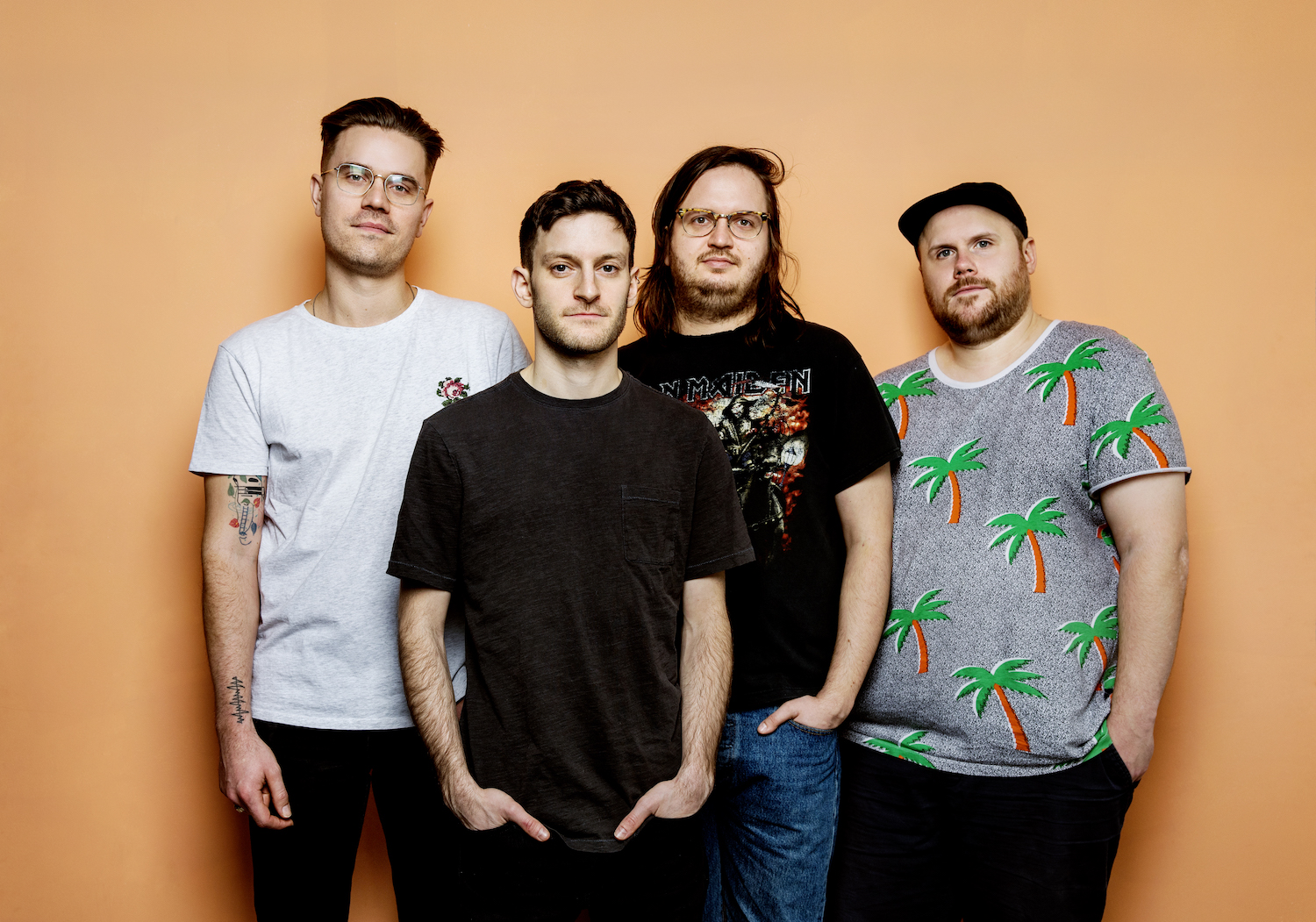 After recording their acclaimed 2019 album, Morbid Stuff, PUP was left with a handful of songs that didn’t make the final tracklist, largely because they were too frenetic or too unhinged. And for an album that fantasized about the world exploding, that’s saying a lot. “We usually save the really dark songs for the end of an album,” says frontman Stefan Babcock. “But we felt that Morbid Stuff was already pretty fucking dark by the time we got there.”

The Toronto four-piece loved these thematic stragglers so much, though, that instead of forcing them onto the record or hiding them away forever, they decided that they deserved to stand on their own. The excluded tracks are now seeing the light via a six-song EP, This Place Sucks Ass (October 23, 2020, Rise Records).

Among them are “Nothing Changes” and “Floodgates,” which inject hints of the band’s trademark self-deprecating humor into sentiments of crippling neuroses. “Instead of crying, whenever I think of dying, it only makes me laugh,” Babcock sings on “Floodgates,” which might as well be the band’s mantra. There’s also the unwieldy “Anaphylaxis”; a punked up cover of Grandaddy’s “A.M. 180” (as made popular by the zombie apocalypse film 28 Days Later); and closer “Edmonton,” a cathartic, 70-second ripper that nearly unravels violently from its opening chord to its final spiraling riff.

This Place Sucks Ass also includes a post-Morbid Stuff addition with opener “Rot,” which was written and recorded this year. The track sees Babcock grappling with the feelings of self-doubt that have come with acclaim and good fortune, in lyrics like, “I’m doing something productive with my self-destruction. It’s the one thing keeping me sane.” Indeed, the critical darling band has been met with their share of success over the last seven years—winning a Juno Award for Alternative Album of the Year, being shortlisted for the Polaris Music Prize, performing on NBC’s Late Night with Seth Meyers, and playing venues around the world packed with rabid fans. But, the members all fear, it’s a career that could disappear at any minute.

“There’s a lot of guilt and self-sabotage that goes on within our band,” Babcock explains of “Rot.” “It’s this weird thing where the more we write songs about being fuck-ups, the less we become fuck-ups. That causes a weird imbalance in my brain. I have big-time imposter syndrome. I’m just waiting for this whole thing to collapse.”

This Place Sucks Ass’ cover depicts an apocalyptic neon nightmare courtesy of Canadian artist Brandon Lepine (with a limited edition animated picture disc vinyl to match). And as for the title, it was plucked from an inside joke that has become all too real over the last few months in a world equalized by the ravages of COVID. “It was a thing we used to say as a joke a million times on tour,” Babcock says. “Literally any city, whether it was Lethbridge, Alberta, or New York City, we’d be like, ‘This place sucks ass.’ We have so much negativity, and sometimes it becomes so extreme and ridiculous that we start to find it funny. But at this moment in time, it feels so fucking real. Wherever you are, it sucks ass right now. So, wherever you live, whatever your circumstances, this is an EP about the place you’re from, and the place you’re at now.”

Each of PUP’s three albums (their self-titled debut in 2013, 2016’s The Dream Is Over, and 2019’s Morbid Stuff), has been a meticulously curated work that has taken its respective toll on the band. “We’ve all individually and collectively lost our minds in the undertaking that is our creative process,” says guitarist Steve Sladkowski. “I’m not trying to make it sound like it’s some Herculean thing, but the way in which we work is such that it involves a lot of stress.” And their hard work has paid off, landing them on Best of the Year lists from outlets like Pitchfork and Rolling Stone. For This Place Sucks Ass, however, they say it was relieving to let loose and put something into the world that values pleasure over perfection.

“Our expectations are so high. Every album we make, we want it to be better than the last,” says Babcock. “But just putting out songs we like and think are fun, that’s also pretty rewarding. Taking a breather from the pressure we put on ourselves has been so positive for us.”

Like all of their material, This Place Sucks Ass is a document of the band PUP is—at times thoughtful and introspective and at other times wildly cathartic. And they hope that fans will take its sentiments of anger, frustration, and bitterness that run through This Place Sucks Ass and find collective empowerment and joy in turning them outward along with them. “Everything sucks and that’s OK, because it sucks for everybody,” says Babcock. “And we can make it a little bit better by being together in the shittiness.”