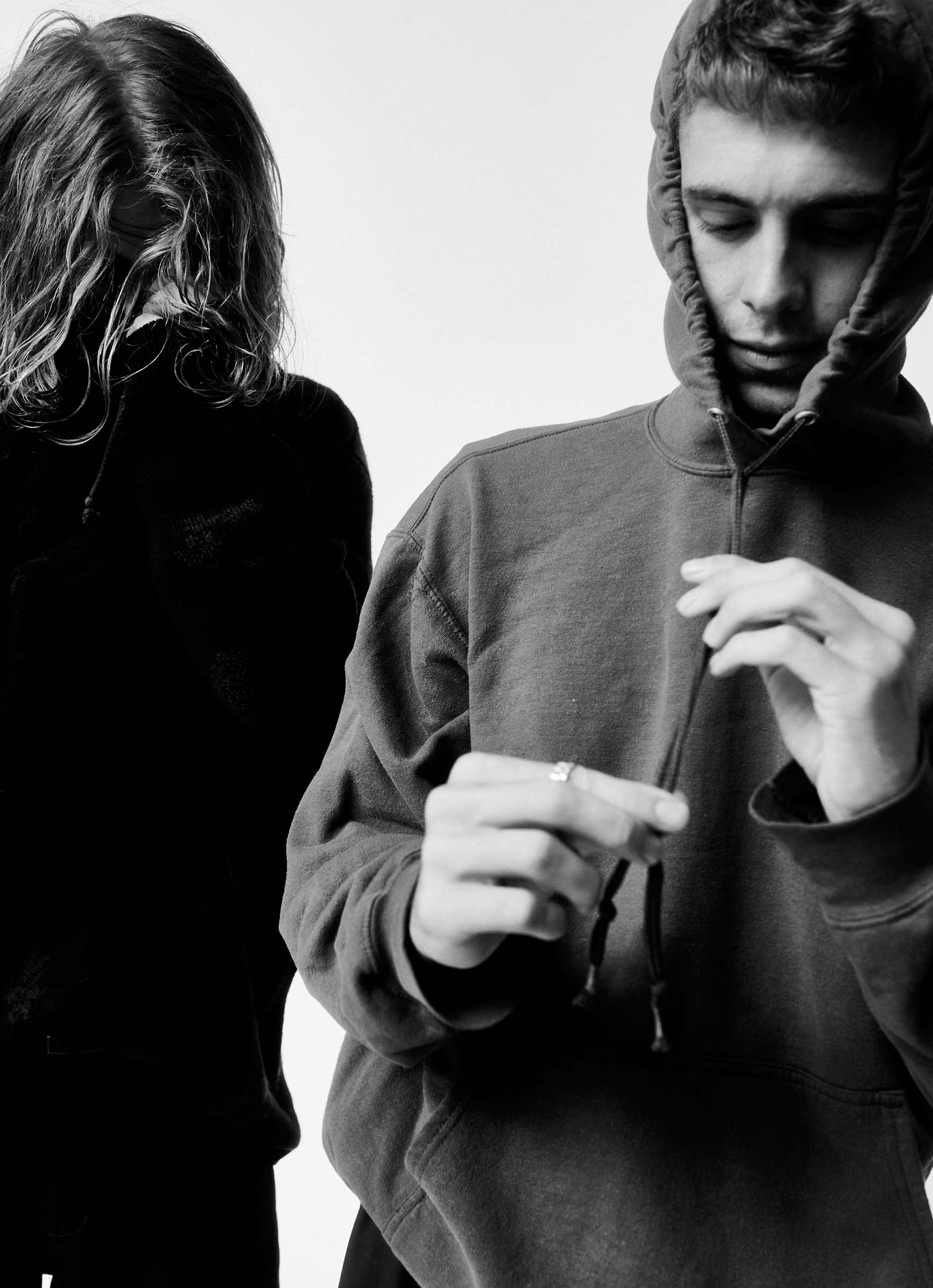 Sometimes, all it takes is a song to bring people together. Otis Pavlovic and Royel Maddell might never have started making music with each other were it not for the sublime sound of Long Island duo the Alessi Brothers’ 1976 single ‘Seabird’. A formative yacht-rock anthem that combines a little bit of Steely Dan with a whole lot of soul and falsetto harmonies, it was love at first listen for both Pavolvic and Maddell. When the pair of relative strangers ended up exchanging ideas for a potential project, both knew exactly what they wanted it to sound like: ‘Seabird’. “It’s stunning,” explains Maddell. “Fucking flawless.”

Pavlovic and Maddell barely knew each other before they got into a studio together, even though the fresh-out-of-school Pavlovic was something of a regular at the Bondi Beach bar Maddell worked in. A “dark, moody and grungy place”, Pavolvic would often find himself playing pool there with his pals, slightly in awe of the older guy pushing pints behind the bar.

One day in 2019, Pavlovic plucked up the courage to send that guy a demo of a song he’d been working on. “We’d gone out for beers once before and I knew he had good taste in music,” remembers Pavolvic. “I just wanted to see what he thought of it.” Pavlovic was just after a bit of feedback, but Maddell had other ideas. “He had a listen to it in the shower and then texted me and said, ‘this is cool – we should do something together’.” But Pavlovic had just left Australia to go backpacking around Europe for two months. “When I got the message I was like, ‘fuck’,” laughs Pavlovic. “I was already at the airport in Dubai!”

Collaboration was on both of their minds for the whole of the trip and as soon as Pavlovic got back, they began working together, seeking inspiration from everyone from Daft Punk to The Strokes. Maddell – who had spent a couple of years in New York making music before returning to Australia – used his sunroom as a makeshift studio, combining ideas he’d been playing around with in private with Pavlovic’s material, lifting drum lines from other people’s tracks and layering them under Pavlovic’s vocals in order to create ‘Wait’. Their very first song as Royel Otis started out live acoustic, before Maddell beefed it out with a beachy guitar riff. “It made it sound so sick,” remembers Pavlovic. “I had to steal drum beats from other songs for it,” reveals Maddell, who lifted a floor tom sound from Peter, Bjorn and John, weaving into his sonic patchwork. Instantly, the duo landed on the blueprint for their early sound – an impossibly summery kind of seaside dream-pop.

Released in late 2021, Royel Otis’s debut EP, Campus, leaned fully into this organic, nostalgic sound, bringing a swooning psychedelic edge to proceedings for extra-added blissfulness. “But then we started drifting…” explains Maddell. With the dream pop thing fully nailed, the duo wanted to get a little looser. That’s just what they’ve done on new EP, Royel Otis Bar n Grill, which sees them swapping synths for guitars and making everything that much grittier, while still showcasing their knack for an exceptional pop melody and a killer catchy chorus. “It feels like this is the first EP in which we’ve actually found ground that we can lift off from,” explains Maddell, “rather than as if we’re just figuring something out in the studio. We might not stick with this sound for too long, but for right now, it’s perfect.”

Classic song writing is at the heart of everything Royel Otis do. Maddell’s roots are in the greats of the 1960s, with the sleek orchestration of Roy Orbison and Lee Hazlewood seeping into his own song writing. “The chords that they used rarely get used now, and those amazing progressions,” he swoons. “There’s 12 chords in one song! I love that stuff.” Meanwhile, Pavlovic has long been obsessed with Jonathan Richman and the deceptively simple storytelling style of The Modern Lovers. “Originally, that’s what I thought we could sound like, that playful style – and just singing about fun stuff, kind of like he’s still a kid,” he explains. “But I’m inspired by hip hop artists, too. There’s so many different sounds in there.”

What is clear is that Royel Otis Bar n Grill is the sound of a band having fun. Simultaneously tight and loose, it’s scrappy one second and seamless the next. Their comfort with constantly switching things up is all down to the pair’s tight-knit nature. “We like being a duo because there’s less people to blame if something doesn’t go right,” smiles Maddell. “From the start I didn’t want things to sound too sweet,” explains Pavlovic. “I wanted it to sound raw.”

Coming along for the ride on the new EP is engineer Chris Collins (Skeggs, Middle Kids). “He’s the most amazing guy to work with,” says Maddell, and not just because he was whipping them up fresh pasta meals and perfect Jamie Oliver omelettes during their recording sessions. A completely collaborative song writing process, with Maddell throwing in a chorus here and Pavlovic chucking together a verse there, together they powered through the five songs on this exceptional EP over the course of three weeks, crafting the exuberant, youthful likes of lead single, ‘Oysters In My Pocket’, possibly the first ever pop song about bivalves. “Chris was constantly bringing up the idea of oysters when we were in the studio, but we never ended up getting them,” remembers Pavlovic. Instead, they became a chugging, garage-pop anthem.

The upbeat ‘Bull Breed’ was gentle and romantic to start, until Pavlovic threw some wild, woozy guitar over the top. “It’s about young hooligans thinking they’re top dogs in the pub, when they’re just embarrassing,” explains Maddell. “I’ve seen it happen in the pub I work in, but we’ve also been those guys too.” The elegant ‘Motels’ meanwhile is about a young gigolo. Maddell looks sheepish. “It’s semi-autobiographical,” he admits of the song, which was initially written with the idea that Yungblud would sing it. “I wanted to do something punky but laddy,” Maddell explains. “But we ended up coming up with something that’s got more of a Steve Lacy vibe with an R&B chorus.”

The lush and laidback ‘Egg Beater’ sees Royel Otis flexing their ballad muscles even further, a heartfelt anthem which shows they can still be decadent and dreamy when they want to. “All our songs usually all start out as love songs, but then we try to fuck them up a bit,” says Maddell of their process. Royel Otis at their prettiest, ‘Egg Beater’’s surreal title is their attempt to distract everyone from the fact that they’re really just a pair of old school romantics, while ‘Warm Nights’ takes them in another direction yet again. Woozy, sleazy and bass driven, with angelic vocals soaring over the top, it’s an atmospheric tribute to being out too late in the city. “It’s about coming down as the sun’s coming up,” offers Maddell.

Royel Otis are here to soundtrack your highs, lows and everything in-between.