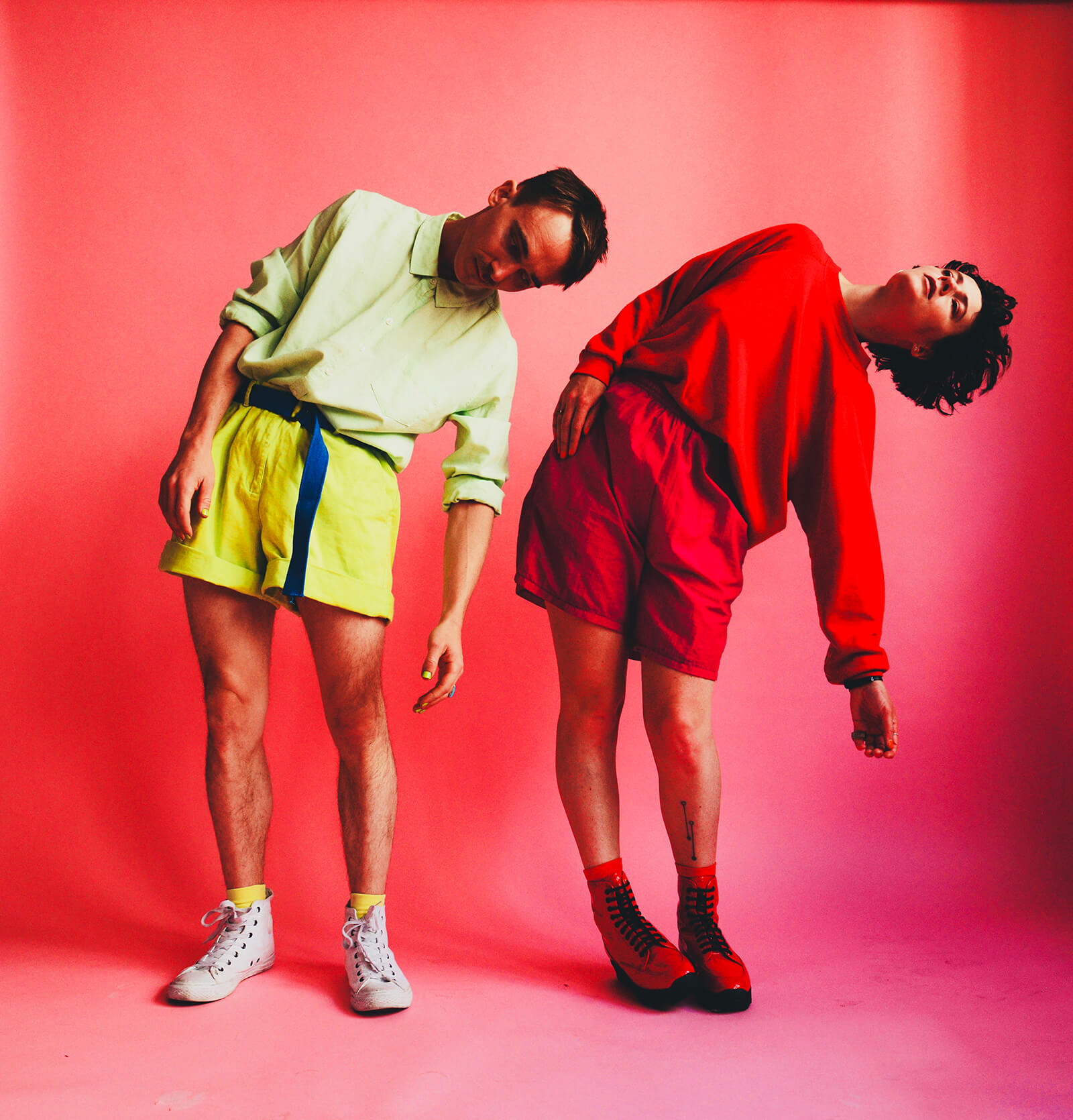 In summer 2015, after finishing a year of intense touring, Rubblebucket’s Kalmia Traver and Alex Toth began the process of bringing their next record to life. As an experiment, Kalmia asked Alex (her longtime romantic partner) to move out while they worked on the album, then accepted the marriage proposal he made during a recording session just a month later. Although Alex soon moved back in, their 11-year relationship ended when the two chose to ‘consciously uncouple’ the following spring—a decision they honored by ceremoniously giving each other matching triangular daisy tattoos (a nod to the title track from Rubblebucket’s 2010 EP). But despite all the sadness brought on by their breakup, Kalmia and Alex kept on writing and recording together, ultimately creating Rubblebucket’s most transcendent album to date.

Co-produced by Kalmia and Alex, Sun Machine documents the pain of ending their romantic relationship, yet emerges as an unbridled and often-euphoric celebration of their lasting connection. While the breakup inspired much of the album, Sun Machine is deeply informed by several other life-changing occurrences in recent years: Kalmia’s diagnosis with ovarian cancer in 2013 (followed by a round of surgeries and chemo treatments), Alex’s decision to get sober after a long struggle with alcoholism, and the couple’s three-year-long attempt at maintaining an open relationship. The result is a strange and beautiful paradox: a party album rooted in radical mindfulness, a breakup record imbued with each partner’s palpable love for the other.

With its airy melodies and lavish textures, dream-logic sensibilities and dancey rhythms, Sun Machine radiates the bright and joyful energy encapsulated in its title. “It’s a reference to the sun as this abundant natural resource we all have available to us—but it’s also about the inner sun, the magma in our hearts,” says Kalmia. “When you can access that, you’re able to get through really hard moments, and evolve and develop creatively. I think that’s the best way to explain how I was able to work through the process of the two of us transforming our relationship in a positive way.”

As Rubblebucket’s most fully realized album yet, Sun Machine finds Kalmia and Alex tapping into their creative instincts more freely and directly than ever before. “Kal and I are both jazz musicians, and jazz is very much driven by improvisation—it’s about getting in touch with that inner spontaneity, where you’re channeling ideas rather than thinking them up,” says Alex. “There’s a lot of moments on this album that happened from us being in a trance-like zone, and coming up with weird sounds in the middle of the recording, sometimes by accident.”

The hypnotic opening track to Sun Machine, “What Life Is” unfolds in lyrics that arrived through pure stream-of-consciousness. “I had recently gotten sober, and the only music I could listen to was drone music,” Alex recalls. “I’d put it on and pace around my little studio apartment, and those words just started coming out of me.” With Kalmia delivering a wild sax solo later on in the song, “What Life Is” centers its refrain on a gently unshakable question: How many hours a day are you a broken tape? “We have so many distractions now, with all the crazy things happening in the world and all the devices we get to observe those things through,” says Kalmia in reflecting on “What Life Is.” “There’s so many different and confusing directions for us to get drawn in every day.”

Throughout Sun Machine, Rubblebucket adorn their exploration of love and sexuality and grief and healing with bursts of collage-like experimentation. “Annihilation Song” is woven with ambient tones constructed from a sample of Alex whistling, while the wistful but breezy “Fruity” was built from a beat supplied by Kalmia’s cousin, Ben Swardlick (a member of San Francisco-based electronic duo M Machine). And though it was written in the throes of their breakup, “Lemonade” captures a carefree romanticism (“We used to ride around on rollerblades/You kissed me on the mouth and my pupils dilated”), then magnifies that playful mood by layering in fragments of improvised conversation at the bridge. “Kal and I just hit record and pretended we were in a music venue during the trumpet solo,” Alex explains. “We talked about Kafka and chakras and existential philosophy, and at one point we talked shit about the trumpet player—which is actually me.”

From song to song, Rubblebucket infuse Sun Machine with a sweetness and generosity that speak to the devotion behind their conscious uncoupling, a process Kalmia defines as “signaling to the world that you’re doing everything you can to preserve the relationship.” With Alex describing their breakup as “the single-most significant life event beyond me being born,” both band members hope that Sun Machine encourages others to see the possibility for transformation in painful experiences of all kinds. “When I got cancer and Alex quit drinking, that was the beginning of a huge journey for both of us,” says Kalmia. “So much of that journey has been about giving myself the freedom to exist on my own terms, believing in my ideas instead of self-editing. I think this album represents both of us allowing ourselves that freedom in a totally new way, and hopefully it’ll give people inspiration to be creative in their own lives, and to just soften up a bit too.”