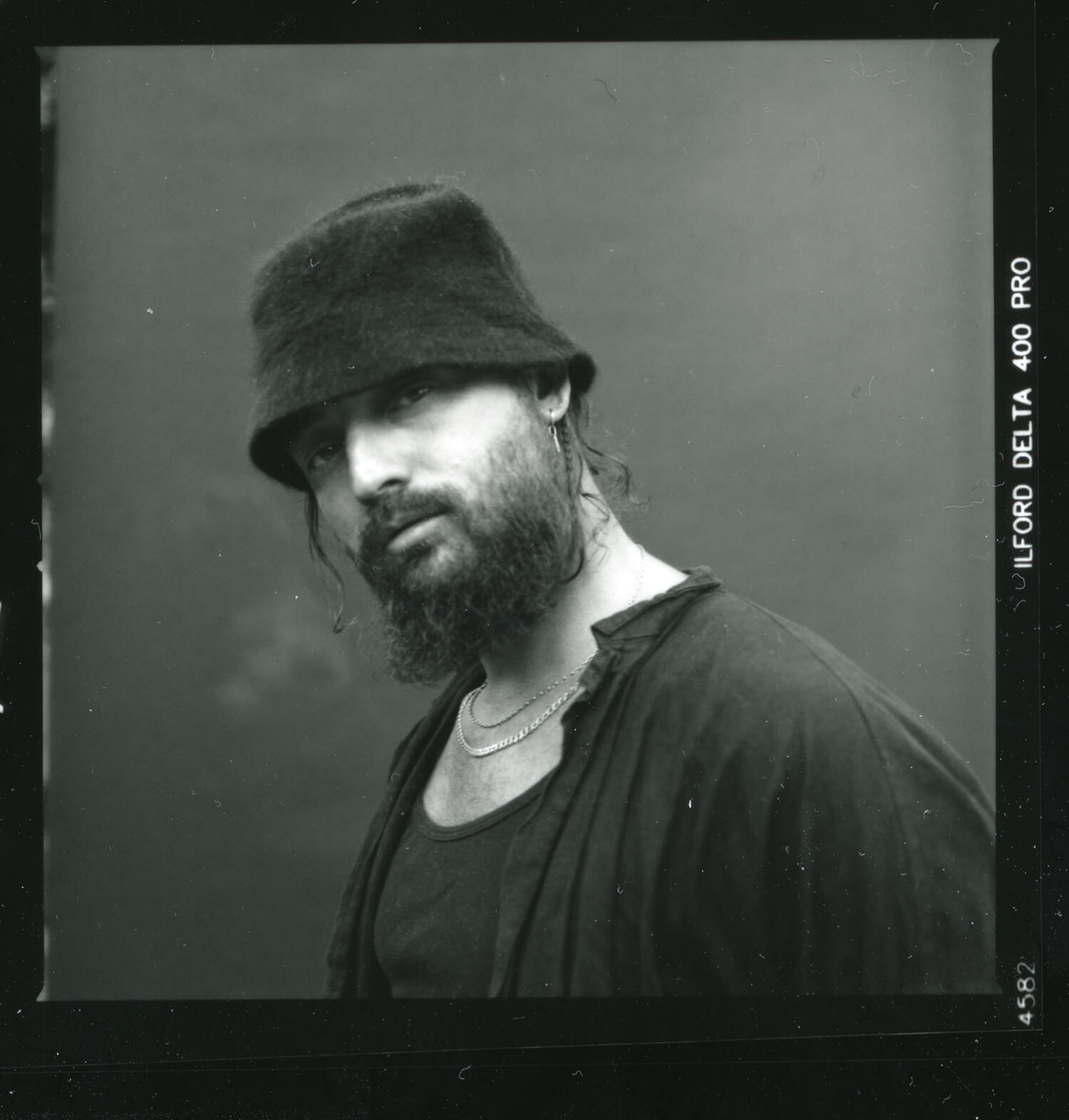 I grew up by the sea. On an island. In Australia. My school had 11 kids in one room. We didn’t have to wear shoes there. My mum was a yoga teacher, my dad a sustainable planner, and surfer. We grew our own food, had goats for milk and chickens for eggs. We named them all. I feel in love with music through my dad’s record collection. The vinyl felt big and beautiful in my hands. I chose what to listen to from the covers mostly, and found my dad’s old guitars to strum. It started a quiet fire.

I have always had a very deep connection with the sea. I would visit it many times a day and night, wake and walk to surf as my first movements and return as last moments of every day. I still do most days.

Music and the sea have defined my life ever since. I saved money to travel the world as a teenager, left home at 17 after school. A surfboard, a guitar, and a backpack. all I needed.

I got moved by the folk and experimental music of the 60s and 70s through all that vinyl. Then found my own genres… grunge, ambient, and the most delicate of artists, Jeff Buckley when I was 15 or so. It moved me. I think I had decided even then that I wanted to give myself to music.

I started creating from that place, before I left home, and among my travels. Writing, shaping song and sound, learning to use my own voice. I was playing music in a hallway of a hotel in Costa Rica to some new friends and someone saw me there.. they invited me to LA to play for some people. I did. It began a very interesting journey. I would leave my island in Australia and go back and forth to LA with support from patrons that wanted me to share my work with me. I had a whole universe opened to me. One that I didn’t totally understand, but it expanded my mind a lot. I realized then how different I was.. the way I grew up, the way I saw and experience the world.

I dabbled in that world, of the music industry and moving up… then I realized it wasn’t for me. I left, disenchanted, but clear, that I would make music only from my heart, and didn’t really need others to hear it. I moved to Indonesia for a while. To surf and lean more into my own spiritual practices. I grew a lot. shed skins. let go of old narratives. And then I started making music again. It was the beginning of RY X.

My travels took me to Berlin, in a deep winter. It was shocking then.. in all the ways. The cold, the culture. The depth of experience and shadow I hadn’t touched. I leaned in to touch it all, and found myself in an underground club scene that felt strangely resonant. It was not as much about the music, as the freedom of expression. I felt seen in a way I hadn’t before. It informed me a lot, as a person, and as an artist. The people’s energy there felt more akin to mine too. It became my artistic home.

I recorded the Berlin EP on a trip back to California in an old A-frame house with some dear friends. It was done live, all in a few days. I can’t remember how but a label owner in Sweden heard it and wanted to put it out. I wasn’t sure i wanted to at all. but over time we agreed to put it out on vinyl only. It was comforting to know it would exist in that same form of records, and not in online spaces then.

I had been collaborating with some artists in the german Techno scenes and Frank Wiedemann and I released a version of Howling then too.. it took off in that club scene that was still new to me. No press, no plans.. just music to the people. I felt held in that process. I gained trust to share music in that way, and haven’t looked elsewhere since. Music to the people. no need for too much around that. Its humbling, and beautiful. If it resonates, it resonates. simple, pure. If it doesn’t, maybe it’s not good enough, time to make more work. I started another project around then too ‘The Acid’ with some other friends. They all took lives of their own. built communities and crowds of their own. I felt I could express different parts of myself in the different projects.. so I poured into them all, and still do. I love the different expressions.

I didn’t expect RY X to be where it is….

To sell-out Royal Albert Hall with The London Contemporary Orchestra

To be on charts, have a gold record, number 1s in certain worlds, to have an honorary Grammy nomination, and accolades in the other projects.. hundreds of millions of streams… it’s all surreal, and I’m also deeply proud of it. Especially knowing its all been  from a place inside myself that feels aligned.

I’m most proud of the songs and video and art I create that’s from a deeply authentic and intimate space. I know intuitively when its there, and work hard to stay in that state to make my art from. Sometimes I miss the mark, or drift.. get caught up.. when i feel that I work to get back to that state of ground and rawness underneath. That seems to be the place where my best creating comes from.

I continue to pour into them all.. with an ache and passion always. a deep drive to make art every day and the need for the sea, always the sea. I’m happy when I’m with the sea.

Currently, I’m working on new RY X album, and releasing a live album with LCO from Royal Albert Hall. I’m also pouring into a new album with The Acid. New sounds, new worlds to explore. I am swimming deep. I’m working on growing and expanding the live shows with RY X into new forms with orchestras and visuals in beautiful dripping spaces too, always. Can’t wait to share that around the world.

The Acid has a beautiful and meaningful project ‘The Bomb’ that is an anti-nuclear installation film project with directors Eric Scholsser + Smriti Keshai that is ongoing. We performed at Berlinale, Tribeca, Glastonbury, and The Nobel Peace Prize. It’s special to give into meaningful work and cause always, and an artist’s role in the world.

I am continuing my work with Frank Wiedemann on our project ‘HOWLING’, with an album out recently called ‘Colure’.

Its a lot of giving, pouring, a lot of time and energy. and I wouldn’t have it another way