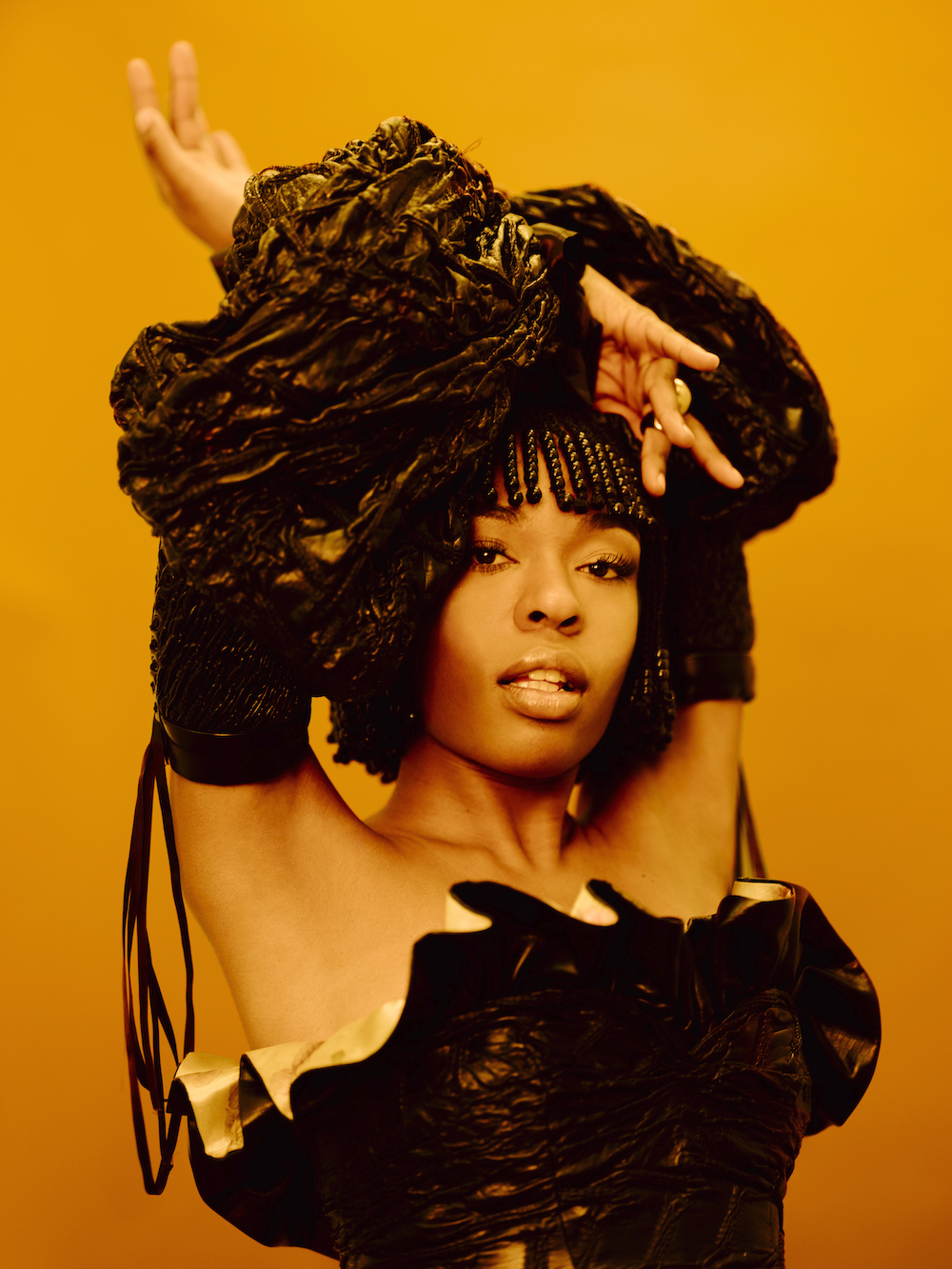 Sudan Archives contains multitudes. She first emerged as an avant-garde violinist who channeled her playing through loop pedals. But she’s also much more than that: lovelorn songwriter, powerful vocal performer, and experimental beatmaker. She’s captivated audiences at festivals around the world with her hybrid sound, playing at Coachella, Pitchfork Midwinter, and FORM: Arcosanti, and sharing stages with St Vincent, Ibeyi, and Michael Kiwanuka while touring her trail-blazing EPs ​Sudan Archives​ (2017) and​ Sink​ (2018). Sudan’s many identities truly coalesce in her debut album, ​Athena​: a psychedelic, magnetic take on modern R&B that’s unlike anything else you’ve heard.

“When I was a little girl, I thought I could rule the world,”​ Sudan Archives announces in the sparse, string-plucked opening bars of ​Athena,​ on the strident “Did You Know”. Her musicality and sense of self-belief developed as a young child in the church. Born Brittney Parks, but called Sudan from a young age, she moved around Cincinnati, Ohio many times as a child; religion and music were the most stable forces in her life. It was in church that Sudan began learning to play the violin by ear, participating in ensemble performances. “I remember​ ​begging my mom to get me a violin,” she says. “From there I just never let it go – it felt like I had a purpose.”

Growing up with a twin sister, Sudan also learned young that she was the “bad twin”. Her stepdad – a one-time music industry executive – tried to turn the two into a pop duo when they were teenagers, but Sudan would miss rehearsals and curfew so frequently that the project was abandoned. Still, the experience was valuable: “My stepdad basically planted this whole idea of artistry as a career,” she remembers. Though she left the band behind, Sudan clung onto the idea of pursuing music when she moved to LA aged 19. While studying and holding down two jobs, she would spend her spare time “fucking around with some beats and making some weird shit”, which she released tentatively under the name Sudan Moon – a combination of her childhood nickname and her love of Sailor Moon. The ethereal quality of those early lo-fi, G-funk-inspired beats would eventually make its way into Sudan’s current sound.

It was once she discovered ethnomusicology, and learned to incorporate the violin into her beats, that she really unlocked a new level. Cameroonian electronic music pioneer Francis Bebey was an early inspiration: “His music is so simple, and the way he combines strings and electronic music is such a vibe.” From there, she educated herself about other artists and ethnomusicologists, learning about the history of one-string fiddling in Ghana, Sudan, and all over the world, which “blew my mind”. Now a fervent crate-digger with ambitions of studying ethnomusicology, she changed her artist name to Sudan Archives.

(with adulations from the ​New York Times​ and NPR) that she left school to focus on her career. Her second EP ​Sink​ was a resounding six-track statement that, according to Jenn Pelly at Pitchfork,​ saw Sudan “level up as a songwriter” — especially true of the bold self-love song “Nont For Sale”.

Those EPs, Sudan says, were “like a haiku of what the album is”. ​Athena​ is “more in your face, more confrontational – and that’s also how I’ve grown as an artist. I used to be a hermit who would make beats in her bedroom, but now I’m working with other writers, producers and instrumentalists, I’ve learned how to communicate. It feels like I’m almost back in church.” At first, it was tough for Sudan to cede any control in her creative process, but as she got stuck into the sessions with producers Wilma Archer (Jessie Ware, Nilufer Yanya), Washed Out, Rodaidh McDonald (The xx, Sampha, King Krule), and Paul White (Danny Brown, Charli XCX), she opened up. The resulting album, whittled down to 12 taut tracks from around 60, is her most ambitious work yet.

Athena​ is about duality. Its lyrics move between tenderness and strength, “like a battle within myself”. On the gauzy whisper of “Black Vivaldi Sonata”, Sudan grapples with questions of right and wrong, invoking the relationship between God and the devil. Elsewhere, duality comes in the form of relationship conflict, a lot of which went into this album, as Sudan coped with both a break-up and with her twin sister moving to LA after years of separation. “It’s weird, your twin coming to live in the same city,” says Sudan. “You kind of feel complete. But because you have these two sisters in the same city, their differences are so vivid. You can figure out yourself more by seeing that. It was some weird yin/yang shit.”

The biggest sense of duality that Sudan was working through was the divide between how she perceives herself, and how others perceive her. She nods to her pet snake as a “visual theme” for the record: “He’s so sweet and cute, and he doesn’t want to hurt anybody, but everyone is afraid of him. I deal with that – men have told me, ‘You look intimidating’. Or someone will be like, ‘Smile!’ But I’m totally non-intimidating when you get to know me, I’m actually shy.”

On the orchestral sweep of ​Athena’s​ lead single “Confessions”, Sudan announces over a sharply percussive violin riff: ​“There is a place that I call home, but it’s not where I am welcome”​. “It’s about my journey from Cincinnati to LA, knowing you’re different, and embracing it,” Sudan explains. “All your imperfections, everything: putting it all out on the table.” Throughout ​Athena,​ she flips R&B harmonies and grooves into narratives of the glorious misfit. On the soaring choruses of “Coming Up” and “Limitless”, Sudan provides uplifting messages for other young women who feel isolated. “I’m talking about girls in emotionally abusive relationships. What I wanted to say is: know your power.”

On the album’s cover, she poses as a Greek goddess sculpted in bronze. Simultaneously at her most powerful — channelling the energy of her princess warrior heroes Xena and Sailor Moon — and her most vulnerable, Sudan challenges the viewer to see what’s under the surface. “I’m naked!” she says. “I don’t have anything to hide at all, it’s all out there.” She even remembers

momentarily breaking down in the studio while recording the tender break-up ballad “Iceland Moss” (​“You think I’m soft, like Iceland moss”​).

The album’s emotional heart beats through “Glorious”, one of Sudan’s personal favourites. Backed by a marching beat and blown-out bassline, Sudan layers her voice into a melodic army, before being joined for a rousing verse from Cincinnati rapper D-Eight​.​ “It’s like a resolution,” she says. “I’ve gone through all these conflicts, I’ve dealt with myself, I’ve questioned what’s right and wrong, but at the end of the day, it’s about growing your craft, taking care of your family. It’s about just taking whatever’s happening, and cranking it to the max.”