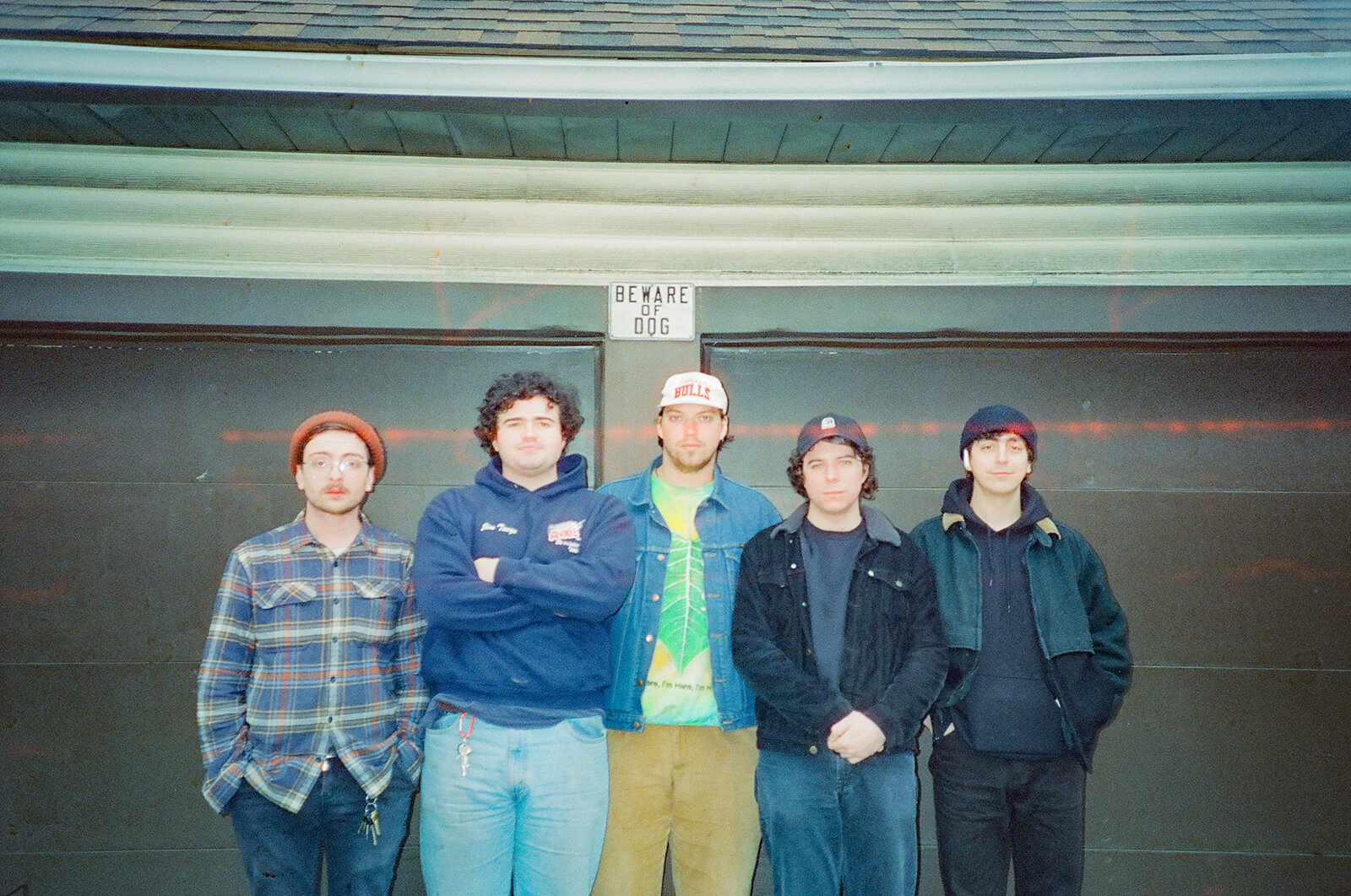 Twin Peaks has one defining ethos and it’s to keep pushing. They’ve embraced change ever since their 2010 formation as high school friends making scrappy basement rock ‘n’ roll to now cementing their status as one of Chicago’s most essential bands. Where their last LP, 2016’s Down In Heaven, and 2017’s Sweet ‘17 Singles compilation were adventurous and compelling updates on their youthfully raucous formula, their fourth album Lookout Low feels like a total revolution.

Already a well-oiled live unit, the band set on capturing the thrilling vibe of their shows.  The five of them, guitarists Cadien Lake James and Clay Frankel, bassist Jack Dolan, multi-instrumentalist Colin Croom, and drummer Connor Brodner committed to work countless hours in their studio and practice space. The band had never attempted anything that daunting before, demoing 27 songs and relentlessly rehearsing them until they were satisfied. “We wanted to hold ourselves to practice almost every day and be tight to hone in on these songs,” says Dolan.

Having the entire band in the same room so frequently allowed for new experiments. “This was the most collaborative it’s ever been for us. We wanted to try all the weird ideas and be as open as possible,” says Brodner. Take lead single “Dance Through It.” What originally started as a demo the band jokingly claims evoked Sheryl Crow, it revealed itself when Croom suggested a drastic change in the rhythm section, infusing the arrangement with a gospel and soul-inflected swing. Because the band was willing to reimagine the song from its original vision, the result is one of the most obvious highlights on Lookout Low. When James sings the track’s chorus, backed by gang vocal harmonies, it might be the catchiest hook Twin Peaks have ever written. “There’s no ringleader in how we write songs. Things would be a lot easier if there was one guy calling the shots but we really put an effort to make it work and make everyone happy,” says Frankel.

After whittling 27 songs down to just a handful, the band knew that the tracks deserved a more ambitious strategy that called for outside help. When legendary producer Ethan Johns showed interest, they took a leap and decamped to Monnow Valley Studio in Wales for three weeks. “Twin Peaks are the best Rock and Roll band I’ve heard for a very long time,” said Johns. “Not only do they have something to say, they do it honestly, and with dedication and passion.”

The feeling was mutual. Twin Peaks knew and admired him for his work with Paul McCartney, Kings of Leon, and U2,  “When we knew he cut everything live, it was intimidating but so exciting. We needed a challenge,” says James. At Monnow Valley, they thrived on the thrill of live recording, often just going with the magic of the original first take like on “Oh Mama” and the title track. The life-affirming burst of adrenaline that Twin Peaks give their live show is their strongest asset, one that seeps into every facet of the LP.

The songs are bursting with energy, like the spidery jam-minded opener “Casey’s Groove,” a mind-melder that is reassuring thanks to James’ inviting croon. Following the tracking, Twin Peaks recruited their Chicago comrades OHMME to sing backup vocals on seven of the 10 tracks. Cuts like “Under A Smile” transform with Macie Stewart and Sima Cunningham’s spectral harmonies. Throughout the LP, Croom wrote horn arrangements that at times evokes the soulfulness of Allen Toussaint and the burly Americana of the E Street Band. The auxiliary percussion from drummer Kyle Davis expands the already breezy and spread out compositions. Though it’s obvious how locked in they were from just a casual listen, the band was so focused during the entire process that they rarely left the property’s countryside grounds.

What makes Lookout Low a triumph is how each individual member of the band upped their songwriting for the LP. The James-led opener stands as his most impressive offering yet in sheer confidence and experimentation while Dolan’s plaintive “Unfamiliar Sun” is possibly the album’s most affecting track, burrowing into self-reflection and hard truths. But for Croom, who joined the band following their 2014 sophomore LP Wild Onion, his contributions in “Laid In Gold” and “Ferry Song” showcase perhaps the biggest leap forward. For the latter, Croom left Chicago in Spring 2018 to spend a week writing in New Orleans. He stayed at Algiers Point, taking the ferry to the city each day. As the track hits its boiling point, Croom accesses a part of his vocal range he’s only hinted at in previous record.

The LP closes with “Sunken II” a song Dolan had written for the band years ago. It’s a moment of resonance capping Lookout Low, a document of how much they’ve grown as friends and artists from their teenage beginnings. No band could come up with a full-length so deliberate and seamless if not for having that singular bond that’s only grown tighter as their lives have changed. It’s a brotherhood, one that’s endured for almost a decade. “Everyone’s having so much fun playing together as we’ve all grown and gotten better,” says James. Adds Dolan, “There’s something intangible about how our chemistry and friendship has evolved. We rely on each other so much.”